Today 307 years ago the French inventor Jacques de Vaucanson was born in Grenoble, France, the son of a glove-maker. Vaucanson’s early fascination with mechanical devices is said to have initially come from his detailed observations of the mechanism of church clocks, made while accompanying his Catholic mother to her confessions. He was seven when his father died, so the boy was sent to be educated by Jesuits, and later accepted to become a novice in the religious Order of the Minimes in Lyon, as he thus hoped to be able to continue his scientific studies. Yet, he soon realised that his mechanical creations were not appreciated in this milieu, so he left the order and went to Paris.

By 1738, Vaucanson had put together his first major humanoid, the Flute Player (anchored on a pedestal), which was shown to the public in exchange for an entrance fee from February 11. It caused a major sensation, as this life-sized wooden automaton not only seemed to correctly reproduce the complex combinations of breathing / blowing and muscle movements of a real flute player, it also played 12 different tunes – a mechanical replica of Man that could breathe! 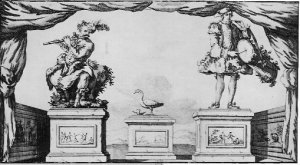 A year later, when attendance of the exhibit began to flag, Vaucanson introduced two further sensational contraptions, once more exhibited on large bases (housing the mechanism): the Tambourine Player, which produced its tunes faster than any living musician could, and the Digesting Duck made of gold-plated copper. The latter was his most astonishing achievement, as it moved precisely like its living image and could, besides, eat, drink and ‘digest’ with visible results. 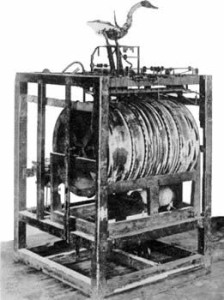 In 1741 Vaucanson was appointed inspector of France’s silk manufacture. He sold his mechanical creations – now no longer extant – and lent his considerable genius to the reorganisation and improvement of this ailing industry. His innovations included a new design of fully automated looms. That was too advanced for the silk workers who, fearing for their jobs, went so far as to pelt him with stones in the street regardless of the public punishments decreed by the authorities.

Incidentally, the automatism of the looms was controlled by a punched paper-strip – a method used centuries later with the earliest computers. Vaucanson was clearly far ahead of his time, and it would take about half a century before the French weaver and merchant Joseph Marie Jacquard (1752-1834) would build on the designs of Vaucanson and his predecessors Basile Bouchon and Jean-Baptiste Falcon to create the semi-automatic Jacquard Loom.

After Jacques de Vaucanson’s death in Paris in 1781, his collection of own and other mechanical gadgetries became the foundation of the “Conservatoire des Arts et Métiers” in Paris. 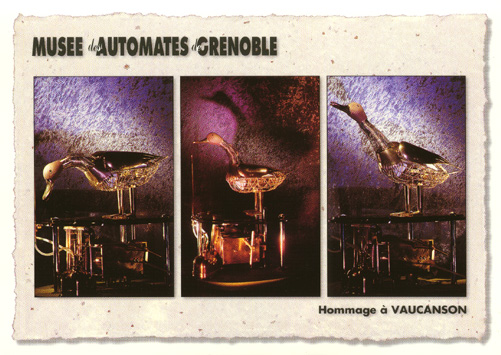