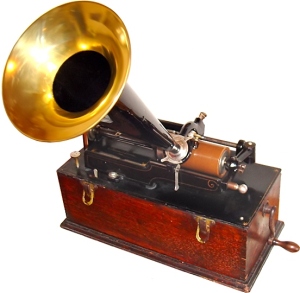 On this day 138 years ago, the American inventor and business man Thomas A. Edison (1847-1931) patented his first major invention, the phonograph, a sound recording device that not only recorded – as others had already managed – but could also reproduce what had been recorded (at least for a short while). While working on voice transmission via cable – like Alexander Graham Bell, who would beat him to the patent – and the recording on paper of telegraph messages, he considered that telephone voice messages might also be somehow recorded. Through trial and error he devised a metal cylinder thinly covered with tinfoil, into which a sound-activated needle would lastingly engrave the sound vibrations that another needle would later translate again into sound. As is well-known, the first sentence he is said to have recorded in late 1877 was the nursery rhyme: “Mary had a little lamb!” People who witnessed demonstrations of his new invention thought that it worked like magic, and before long – as other inventions soon followed (see a list of his patents) – people would call him “The Wizard of Menlo Park” (Middlesex, New Jersey – where Edison eventually built and expanded what is generally regarded to be the first industrial research laboratory). On February 19, 1878, he received the patent for his phonograph. Although he had immediately founded a company for this invention – the Edison Speaking Phonograph Company (Jan. 1878) – the project did not advance much: the device was difficult to operate, the tinfoil did not stay long on the cylinder, and Edison soon dedicated himself to other projects. It was further developed and improved by others such as Alexander Bell, his cousin, the chemist Chichester Bell, and Charles S. Tainter, who came up with a kind of phonograph that used wax coated cardboard cylinders for recording. For more on the story about the phonograph, visit the Library of Congress page and / or The Recording History.

As is well known, Edison would influence modern times in a myriad of ways: his light bulb opened the way to electric light, the development of the motion picture camera made cinema, etc., possible (details here); his experimenting with power facilities would contribute to our daily reliance on a steady power supply and use of all our electric gadgets and machinery.

For a more detailed account of Thomas Edison’s life, go to a biography page. Here is an archive of early sound recordings for the interested. The technical inclined may enjoy this cylinder archive.